Posted on July 10, 2017 by sadmusicforhappyhumans

Hwy 101 and Hwy 1, the Pacific Coast highways, have been falling apart lately.  I was told, before coming, that multiple parts had collapsed and there was no way through without detour; I came anyway…. gotta see for myself.

Turns out highways are open, but with MANY points having one way traffic only since, like… the cliffs under the highway had eroded away.  As had the highway.  Construction everywhere!  Plan for double travel time, and sometimes just sitting there, waiting…. 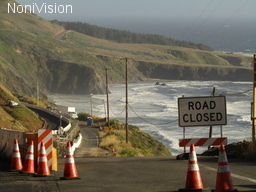 As I neared Ft Bragg, I found that many others wished to stop and appreciate this magical stretch of coast, camping style, and that the state seems to allow for that. After passing a few pay campgrounds, directly on the cliffs, I saw some less monetary based places to park folks were taking advantage of.  The hippies on what looked like private land seemed to expect me to stop (blame hoops and firestaff strapped to the roof of the van)….

… but I opted for the next spot down, which was an obvious non blocked off state pullout, filled with “legit looking” RVs and other vehicles.  By evening, the site was full and latter arriving folks went to the hippy spot.  I probably shouldn’t say this, but this is one of the most legit free camp sites off the pacific highway system; both a place to just stop on the trek, and a place to be happy you are camping at. 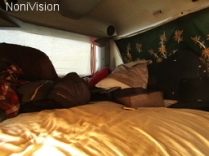 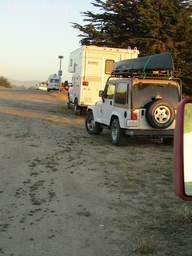